''The more knockbacks the worse it got. Add to that, I didn’t know what I wanted to do for a job, the pressure of exams consumed me. I was terrible at studying; it just wasn’t for me. I then decided one night I was done with life. I went downstairs and took tablets from the cupboards. Went up to my room and swallowed the lot. Blocked my door and cried myself to sleep. I honestly thought that would be the end''

Apparently when I was younger I was loud, outgoing and very friendly. Maybe too friendly as I would walk up to strangers and ask them to be my friend. I wore the thickest glasses you could imagine, I even had to wear a patch for years to help correct my sight but I was a happy happy wee lad, I never got any grief for wearing the patch, if anything my friends thought it was cool. I was 5/6 years old and I rocked up to school with a different animal sticker on my eye and was the bee’s knees.

As I got older I began to put on a little weight but I excelled at sport, I could run, jump and climb. I could play, golf, football, tennis, honestly literally anything. I had good friends, a very very loving family and wonderful parents who did a lot with us and done everything they could to make me and my brother happy.

My eating habits where very impressive for someone so young and little. I would eat far more than most people my age and compete with adults, I was known to finish off family members’ plates.

I started high school and experienced some bullying, but I cannot say that was the defining moment. I was still popular with girls, I would get some valentines cards but I was extremely immature and not ready for girls.

Around 13/15 it slowly dried up I was pretty good at football but because I was overweight, it affected me more and more as time went on. I had the chance to try out for football teams but was petrified about getting changed in front of other boys, this is something that got worse when I got older.

Then I began to drink at 15. I was the guy who could down a bottle of MD in one go and had the “good personality“.

Being active became less a priority and drinking to get drunk was my favourite thing to do. I enjoyed the buzz and the feeling it gave me. It helped me become someone else.

I also became finally interested in girls but I just kept getting knock backs left right and centre. The more knockbacks the worse it got. Add to that, I didn’t know what I wanted to do for a job, the pressure of exams consumed me. I was terrible at studying; it just wasn’t for me. I then decided one night I was done with life. I went downstairs and took tablets from the cupboards. Went up to my room and swallowed the lot. Blocked my door and cried myself to sleep. I honestly thought that would be the end. My mum was suspicious, came to my rescue, phoned an ambulance and off I went to hospital to stop any damage. During that time, me and my father’s relationship went downhill fast. He came through to make sure I was ok and was by my side.

I was off school for a week and came back with people none the wiser. I had no follow up care and was left to go on my own.

I got to around 20 years old. Was in a job I hated and I was headed to back down that slope. This time it was around Christmas time, I had been drinking, I remember waking home and I saw the train track. So I decided here was my time. I scaled not one but 2 10ft metal fences that surround factories. I then walked along the track, sobbing and thinking that was me done. For some reason I called my brother, I don’t know if I was calling to say goodbye but either way he raced to get me. My mum was understandably in bits as was my brother. I don’t know if my father ever knew. My girlfriend at the time seen it all, I done a fair amount of crying and was very, very angry.

I once fought with my father and my brother when we went to visit my father. I ended up in hospital due to tripping over a kerb.

We didn’t have a relationship anymore, I really hated him at the time. I felt I couldn’t do anything right and he was pretty mean about my looks and life.

I later found out he was suffering from depression and developed diabetes but had been unaware of this, this explained the mood swings.

We had a turning point and became father and son again. He supported me more and more and even helped fund my 3rd Summer at Camp Allen in USA. Tragically, he passed away in August when I was there. This was something new to deal with. I felt various feelings of guilt, hurt and what to do.

It somehow spurred me on to change my life and make him proud.

For years I really thought I was ‘crazy’, I thought it would never end and wasn’t sure what the future held for me.

For the last 10 years I have battled with my mind, but I also began to achieve things and finally find myself.

I now understand its very common to go through what I have. It is also possible to function despite having an ongoing battle.

It got to the point I felt comfortable sharing my story and being open about it.

The more I shared, the more response I got. I have received many heart-warming messages who can relate to me or how sharing has helped.

That in itself makes everything worth it. I believe I was meant to go through all that to then give back to others.

I have been able to turn my life around. Working on a new business and opportunities.

I feel strongly about the homeless situation and the impact mental health has on people.

I am not scared to speak up and tell everyone who I am. I want others to feel comfortable in their own skin.

I had the idea to set up a 24 Hour Ben Nevis Challenge to raise awareness of homelessness and mental health. I want to encourage as many people as possible to climb the hill and feel part of something. To see that there are many different people going through similar experiences and that its perfectly normal to.

I have my dark days but I have learned how to deal with it.

I am excited about what the future holds but now keen to live in the moment.

My name is Tony O’Neill, I take medication, I live with my depression and I am no different to anyone else. 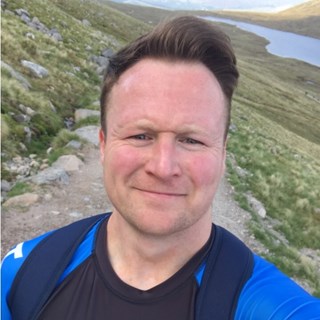