'I had no idea how touching it would be': how a fishing show put men's health in focus

Mortimer and Whitehouse: Gone Fishing began as one friend helping another and has gone on to explore issues many older men might find hard to discuss 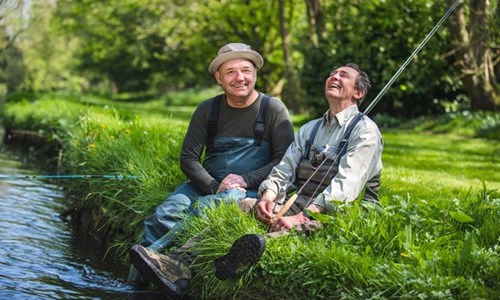 A couple of years ago, early in his time as controller of BBC Two, Patrick Holland got a call asking if he’d have a meeting with Bob Mortimer and Paul Whitehouse, who wanted to pitch an idea. Of course, he was a massive fan: they were comedy heroes of his in the 90s. But then the meeting happened and Holland’s heart sank, because the project turned out to be one about … fishing.

“I thought: I’m new on the job, the first thing on my to-do list was not going to be a show about two old guys going fishing together,” says Holland, before changing “old guys” to “older gentlemen” and then settling on “middle-aged” (Mortimer and Whitehouse are now 61 and 62).

As the meeting went on, though, it became clear that it wasn’t all, or even very much, about fishing but more about friendship and mortality. It would be very funny because Mortimer and Whitehouse are very funny. They cast their wit and their charm and Holland took the bait, though when he told his channel team

“I sort of slightly cringed because I thought no one is going to think that this is the future of television.”

Maybe it is though: with the credits pretty much still rolling at the end of the third series of Mortimer and Whitehouse: Gone Fishing (over a drone shot of the beautiful River Wye), Holland has just commissioned a fourth.

The idea started off, before that meeting, not as an idea for television at all. Mortimer had had triple heart bypass surgery; he was depressed. Whitehouse, who’d also had heart problems, offered to take him fishing. “Paul is a very thoughtful person,” says the show’s executive producer, Lisa Clark. “He knew Bob was feeling quite down and scared to go out.”

It was only when they got to the river and started chatting and larking about that they thought there could be something in it. That authenticity is the show’s secret, says Clark.

“We didn’t put them together because they’d be funny, they’d been friends for years, it was a genuine offer from Paul to help Bob.”

Any doubts Holland had about giving them the green light disappeared when he got to see it. He knew it would be humorous, “but I had no idea until those first episodes started to come back just how special and touching it would be. And open and difficult, in the way both of them approach subjects that men of the age might find hard to discuss.”

The first series was a lot about being ageing men and their dicky tickers. They’ve gone on to talk about childhood, friendship, parents, loss, memories, children. Fishing and fish, too: they’ve even caught a few, before putting them gently back into the water.

It has done well, growing to a little under 2 million viewers. It has also hit something of a nerve. A quick Twitter scan for #GoneFishing reveals, from @1StevieKilner: “Really good to hear Bob Mortimer discussing depression @MVGoneFishing. For me, the man has long been a pick-me-up during difficult times and he and Paul have gone a long way to reminding us of the wonderful things that come from true friendship.” From @FrancescaCawood: “Mortimer and Whitehouse’s Gone Fishing is the best antidote to ‘all of this’.” And so many more.

Dr Anand Patel, a GP and men’s health specialist at the Centre for Men’s Health, appeared on the final episode of the last series, joining Mortimer and Whitehouse to talk about men’s stuff – down there, up there, all over. His impression was of a very complementary relationship. “You get a great sense of what male friendship is,” he says.

Friendships are so important, Patel says. Men aren’t always brilliant at keeping them going, about getting back in touch with someone they haven’t seen for a while because work or family has got in the way.

“It’s not about saying: do you want to come and talk? It’s like: do you fancy coming and doing something – the cinema, the pub, whatever your bag is? Bumping along shoulder to shoulder rather than necessarily face to face seems to be important, it takes the pressure off talking.”

Men are also negligent of their health, both physical and mental, Patel says. “One of the reasons men’s life expectancy is shorter is that they generally arrive [at the doctor] much later in an illness, in cancer say – they’ve had cancer for longer.”

Along with erectile dysfunction, mental health is the most difficult thing to bring up. It is improving, says Patel, younger generations are better about talking, to doctors and to friends. But in over-50s, three-quarters of suicides are men. “Men can talk about their feelings and their health, but it does in some sense require a catalyst,” he says. “It’s about normalising stuff as well.”

That’s why it’s good news that Mortimer and Whitehouse are discussing depression as well as cardiovascular disease, their prostates and their willies so publicly on the telly. “It is so instrumental in getting people to think about themselves,” says Patel.

Clark says the response has been inspiring. “We’ve had letters from people saying ‘I’m going to talk to my doctor about mental health’. I know Paul and Bob: whenever they’re out, people say ‘thank you’, ‘that helped’. Our series two director, Will Yapp, we were filming it and he felt a bit funny, he got checked out, and he ended up having heart surgery. I was like, bloody hell, it’s catching.”

Clark won’t say where they’ll be fishing in the next series, but it won’t be anywhere far away. As well as all those other things, Gone Fishing is about celebrating the natural loveliness of this country. Like the final scene of the last episode, Mortimer floating off down the Wye in his “boat” (more like a bowl, as Whitehouse says), accompanied by Andrew Gold.

“Hands up who wept at Thank You for Being a Friend” tweeted @magnet25433. I imagine quite a few hands went up. 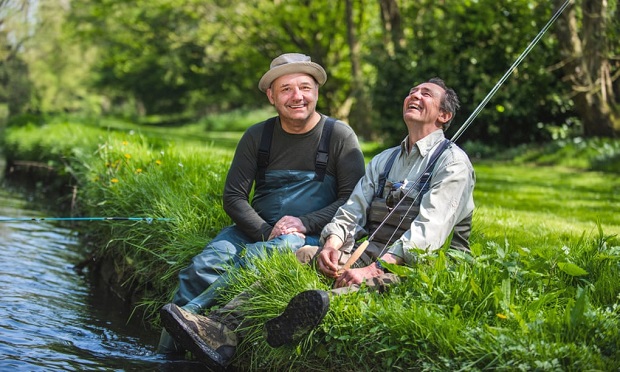