10 tips every man should read to improve his mental health

Suicide remains the biggest killer of men under 45 in the UK. The statistics are eye-watering. There were 6,507 suicides registered in the UK in 2018, according to the Office for National Statistics and three-quarters of these deaths (4,903) were men. What’s more, this proportional imbalance has remained the same since the mid-1990s.

So, who is affected? What causes men to feel anxious, depressed and suicidal? And what lessons can be learned to help men stay mentally healthy?

Our new self-help book, published during Mental Health Awareness Week, seeks to shine a light on men’s mental health and answer some of these questions. Big Boys Don’t Cry?  is a collection of 60 stories by men – and partners of men – who share their experiences and give advice for other men. My co-author Patrick and I have shared our own battles with anxiety and depression in the book.

The backgrounds of our contributors show that anyone can be affected:

there are lawyers, postmen, soldiers, construction workers, Big Issue sellers, businessmen and former professional sportsmen which highlights that absolutely anyone can be affected by mental illness and at any stage in their lives. Mental illness simply does not discriminate, it’s very inclusive.

As former solicitor Will, 48, explains in the book:

“In the past, when people used to talk about those with mental health problems I would glaze over slightly, whilst feeling sorry for “those people”, assuming they had problems in their life which had led to their poor mental health.

As I was mentally fine (or so I thought), it was not something for me to worry about.  A logical, unemotional and slightly uncaring response you might think.

Suits a lawyer, I guess. Still, like most things in life, it is only when you experience something yourself that you really get to understand it and are able to truly empathise.” 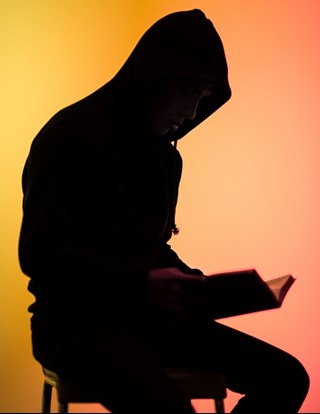 The causes of the mental illness described by the men in our book also vary greatly:

loss and bereavement, childhood bullying, a chemical imbalance, the violence of war, the breakdown of a marriage, sexual abuse.

But they do share common ways of combatting mental health issues, such as anxiety, depression, post-traumatic stress disorder and suicidal thoughts.

The men in our book provide over 200 tips for staying mentally healthy, but we have boiled these down into the following top ten...

1. Talking
Without doubt the most important step you can take. Nearly every man in the book stresses how crucial it is to reach out to family or friends when you’re struggling, however impossible it may seem at the time. Not one of the men said they’d regretted opening up about their problems and many said it had literally saved their life.

2. Therapy
Following on from talking, is the advice from these men to seek counselling. Whether it is group therapy arranged by your GP, a peer-group or therapy with a private therapist, the benefits of sharing your negative thoughts, previously locked inside your head, with an impartial and non-judgmental listener is immeasurable.

Cognitive behavioural therapy (CBT), which helps manage your problems by changing the way you think and behave, was a very popular approach taken by the men in this book.

3. Medication
Many of the men in the book admit to feeling sceptical and afraid of taking antidepressants – often SSRIs (selective serotonin reuptake inhibitors) such as Citaloptam and Fluoxetine or Prozac – but found that medication helped lift them out of a dark place. Combining prescribed medicine with another of the activities found on this list, especially talking therapy, is recommended as the best approach.

4. Visit your GP
Often one of the first steps taken. Speaking to their doctor was the start of their recovery and having a trusted, neutral person listen to their problems and offer guidance and support made the effort to pick up the phone and call the local surgery extremely worthwhile.

5. Mindfulness
The act of focusing on your breathing and learning to be present – not ruminating on the past or worrying about the future – is a surprising and enlightening game-changer said many of the men in the book, who had previously thought meditation was, as one put it, ‘airy-fairy’. It’s definitely worth giving it a go.

6. Exercise
Whether it’s an individual activity like running, going to the gym or taking a yoga class - or a team sport like football, rugby and cricket - a large number of men pointed to the proven benefits of physical exercise. Despite often struggling with fatigue, listlessness and a lack of motivation, they found that even five minutes of exercise released those helpful endorphin chemicals that made them feel a whole lot better.

7. Self-Acceptance/Self- Compassion
Learning to tame your inner-critic and accept yourself for who you are, ‘warts and all’, was seen as a key step in recovery for many of the book’s contributors. Being kind and compassionate to yourself, lowering your high standards and trying to avoid the pitfall of perfectionism were common themes within the men’s stories.

8. Avoid Alcohol or Drug Abuse
The message from men in the book is clear: turning to drink and drugs (or any other self-medication) to avoid your problems, although tempting and understandable, is simply not the answer.

Those men who have recovered, or are recovering from addiction, say that they only began to get better mentally when they became sober. Alcoholics Anonymous (AA) and their 12 Steps programme is cited as a great support for many men struggling with alcohol addiction.

9. Faith
Having a belief in something greater than yourself - be it God, Buddha, Allah or another higher power - is a great comfort to many of those who shared their story. In a world which places such a high value on commercial and material success, having something spiritual in their lives gave these men a greater sense of meaning and purpose.

10. Hobbies
Finding something to be passionate about to distract yourself from the ‘grind in your mind’ was recommended by many of the men. Photography, gardening, Sudoku, a pet dog – whatever you’re interested in – try and make time for old hobbies and be open to new ones too.

There are some fantastic mental health charities doing great work to reduce the stigma around mental illness, for example, CALM (Campaign Against Living Miserably), one of the charity beneficiaries of our book, which helps to raise the issue of our country’s high male suicide rate.

But if we’re ever going to reduce the number of men tragically taking their own lives, we need to encourage men to open up, not to ‘man up’.

Big Boys Don’t Cry? by Patrick Addis and Fabian Devlin is available to buy now as an e-book from  bigboysdontcry.co.uk