MAN-DEMIC, A new kind of Blitz spirit to battle COVID-19 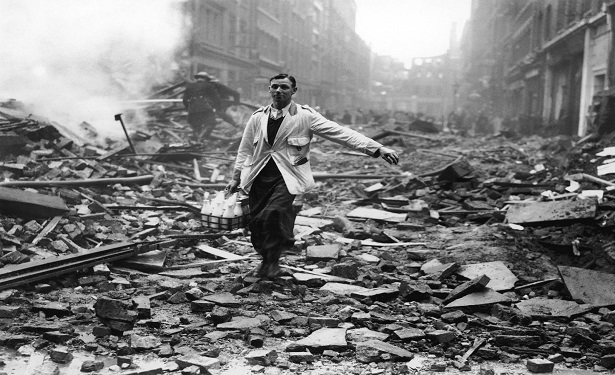 Men are being asked to maintain a ‘stiff upper lip’ in the face of the Coronavirus pandemic sweeping the world. But we’ve known for years just how toxic this bottled-up masculinity can be to our mental health. Darren Smith argues that it’s time for a new kind of Blitz spirit.

‘Madness, isn’t it?’ a stout Asian man says to me, peering over a trolley stacked high with kitchen roll and pasta. A security guard stops him – apparently, he’s got too much rigatoni, which has been limited to two packs-per-customer. He jabs a finger at the guard, remonstrating, ready to use both fists and East-end swearwords to defend his pile. He and his wife makes two customers, not one, he shouts – but the security guard’s having none of it. His wife stands off to one side; she says nothing.

I keep scanning my own heap of emergency rations: medicines and flour. Diet coke. Tins of stuff I know my ex-wife and three children will eat, at a pinch.

Around me men – and it is all men – ignore the half-emptied shelves and grab shrinkwrapped dry goods direct from delivery pallets, while exhausted staff weave around them trying desperately to restock.

At the time of writing, there are 1,391 cases of Coronavirus in the UK and 35 deaths. By the time you read this, there will be more. The UK Government has formally locked down the country. The Times confirmed it: ‘we are at war.’

Such a crisis can have a profound and lasting effect on the male psyche. Fools like me will shop at ungodly hours – a modern take on the ancient male role as a hunter/gatherer. Some will re-enact the old British standby of ‘Blitz spirit’, of stoicism and good cheer in the face of adversity.

And some men will kill themselves.

But Coronavirus is uncontrollable and inescapable. We cannot dictate who gets it, or how or when we might be exposed to it. It creeps invisibly across the country, dropping seemingly from the ether to infect one, then ten, then hundreds. I have spoken with male friends that want the virus ‘over with’, even if it means catching it because the stress of not knowing when or how is driving their blood pressure through the roof.

This virus infects people before they even get it.

The UK Government expects Britons to ‘keep calm and carry on’. Much has been said about the virus and the Blitz. Health Minister Matt Hancock wrote in the Sunday Telegraph: “Despite the pounding, every night, the rationing, the loss of life, [our grandparents] pulled together in one gigantic national effort. Today our generation is facing its own test, fighting a very real and new disease.”

But the world is a different shape now. Communities were smaller then, and tighter, and bound by geography. In the Blitz men gathered in the local pub; today pub numbers are at an all-time low: BBPA (the British Beer and Pub Association) has estimated the number of pubs fell by 37.5 per week between 2016 and 2017. The modern-day meeting-ground, like it or not, is the workplace – yet more and more schools and shops and offices are closing their doors to combat the virus.

COVID-19 will have a profound impact on society. It will accelerate the already unstoppable growth of online shopping, of remote deliveries. It will cut how much we gather in shared places. There is a real danger that our principle contact with others will come via social media alone – the very snakepit that has intensified a us-versus-them mentality of Leavers against Remainers, left against right, and trolls against the world, that in the worst cases aggravates men’s sense of isolation. We’re swapping face-to-face time with FaceTime.

If the Blitz brought the indomitable spirit of the British people together, Coronavirus may well break it apart.

When I get to the house everyone’s up. My ex-wife – a nurse who remains sanguine about the Coronavirus and its effects – scoffs at my panic buying.

‘It’s just a flu,’ she says. ‘Unless you’re eighty you don’t need to worry about getting it.’ I want to tell her it’s not the virus I’m afraid of, it’s the hysteria that comes with it. But she doesn’t get it, and the fight isn’t worth having.

The kids sit in the front window watching, pulling faces. My daughter presses her lips against the window and blows out her cheeks like a pufferfish trapped behind aquarium glass. I wonder if this is what quarantine will be like. I wave at her, then turn away and keep unloading.

It’s easy to give in to the Coronavirus. This new, quasi-hysterical atmosphere of end-of-world despair has followed a relentless eighteen months of Trump, of Brexit, of climate change, of refugees drowning in the Mediterranean, of Australian bushfires. The world of terrorism barely gets a look-in with the sheer weight of disasters we’ve faced.

Even ISIS has told its followers to wash their hands and cease all travel to Europe.

Blitz veteran Denis Gardner said: ‘Life had to go on. We had no counselling in those far off days, we called it internal fortitude then.’ The truth is, we’ve learned too much and come too far for this ‘pull your socks up’ mentality to be of any use to men today. If we’re going to survive this pandemic, men need to cultivate a new kind of Blitz spirit – one more suited to the modern world.

So what do we do?

Oxytocin is sometimes referred to as the “love hormone,” because levels of oxytocin increase whenever you cuddle, or have sex, or have social interactions with people you like and love. The more oxytocin, the better you can manage stress and quell anxieties. Listening to music, meditating, gentle exercise, and orgasms – alone or with others – all help to increase oxytocin levels.

And, of course, we have each other.

In the house my two boys play Fortnite, shooting each other on a fantasy digital island. I can hear them trash-talking their mates, jumping in and out of games. Big chunky headphones with little microphones connect them to their schoolfriends as easily as if they were charging about the playground together.

The youngest joins me in the kitchen for juice and to relive a ‘Victory Royale’. I ask him if that means he beat all his friends, and he gives me a withering look.

‘No,’ he says, ‘we’re playing co-op. Working together. It’s us against the world, Dad.’

I lift a fresh bag of dry goods onto the counter and stockpile the tins. Yeah, I think.

Us against the World...

Read more at The Book Of Man